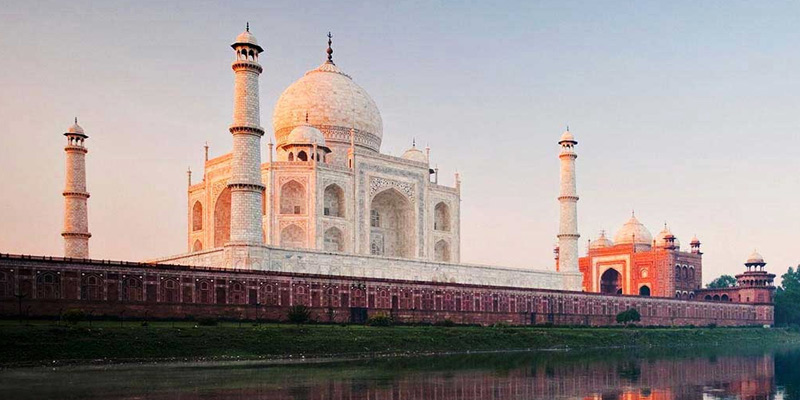 Agra was once the capital of India situated 210 km away from the present capital New Delhi. It is located on the bank of river Yamuna and comes under the state of Uttar Pradesh, India. Agra has a population of about 1.6 million people with various classes and religions. In tourism point of view, Agra is considered way ahead of other cities of Uttar Pradesh due to the Taj Mahal, though it has many other historical buildings as well such as Agra Fort, Sikandara. Taj Mahal is the prime attraction for each and every tourist who visits Agra. Addition of Agra Fort and Fatehpur Sikiri makes sightseeing of Agra a memorable one.

Though Agra was ruled by many kings and empires before 1500 and later since Sultan Sikandar Lodi founded Agra in 1504. But Agra is rich history has been closely associated with Mughal Empire. In other words, Golden era of Agra begun with the arrival of Mughals under the Emperors Akabar, Jahangir and Shah Jahan. It was then known as Akbarabad. Mughal Emperor Shah Jahan built the most expensive monument Taj Mahal in the memory of his late wife Mumtaj. That was completed in 20 years in 1653. It comes under one of the wonders of world.

Best Time to Visit Agra
Taj Mahal is considered the monuments for all season. Believing there is no bad season for visiting Taj Mahal but we recommend our guest to visit Agra between October to March as these are pleasant months to visit monuments of Agra including Agra fort and Fatehpur Sikiri as well. It is not advisable to visit Agra during summer. However, it fails to stop people from visiting monuments of Agra.

How to Get There
Agra is well connected by road and trains from all the major cities of India.

By Rail:
Agra has very good train connectivity from almost all the major cities of India. There are several day trains and long distance trains available, which connects Agra from rest of the cities of India such as Gatimaan Express Train, Bhopal Shatabdi, Bhopal Express, Malwa Express, Gondwana Express, Jabalpur - Jammutawi Express etc. Gatimaan Express Train is very popular train amongst the tourists thoses who likes to do same day Agra tour by train from Delhi. There are three main railway stations in Agra such as Agra Cantt, Agra Fort and Raja Ki Mandi.

By Road:
There are two major bus stations in Agra to cater bus services for all the major cities of North India. Idgah bus station and ISBT (Inter state bus terminal) in Agra are the place to get the buses. There is new Yamuna expressway opened for general public that connects Agra from New Delhi via Greater Noida. It is modern access controlled highway becoming so popular.

By Air:
As of date, No scheduled commercial flights operated from Agra airport.

What to See
There are various tourism attractions spread all over Agra and around but some of them are considered worth visiting. Agra is loaded with incredibly beautiful monuments belong to the Mughal Empire.

Taj Mahal
Principle monuments of Agra and recognized as one of the wonders of the world. Mughal Emperor Shah Jahan gave this prizly monument to Agra that took 22 years (1630 -1652) to complete the construction of Taj Mahal by 20,000 workers. It was made of white marble imported from the place called Makarana near Jodhpur. Sorrowing Shah Jahan built this in the memory of his beloved wife Late Mumtaj Mahal. It is perhaps one of the most beautiful historical build of all time of India. It is also a world heritage site.

Agra Fort
It is also known as red Fort also built by Mughal emperor Akabar in 1565. It is also a World heritage Site and red sand stone, marble and pietra dura inlay were used to build Agra fort. It houses the prominent structure of Mughal Era such as Moti Masjid or pearl Mosque, Shish Mahal or Mirrored palace, Diwan-e-Aam (Hall for public audience) and Diwan-e-Khas (Hall for private audience).

Sikandara
Mughal Emperor Akbar was buried here in Sikandara, which is 13 km from the city of Taj, Agra on Delhi-Agra highway. It is a beautifully carved, red-ochre sandstone tomb. Akabars son Jahangir completed the construction of this tomb in 1613. Akbar selected this site for his last resting place when he was alive.

Fatehpur Sikri
It is 32 km from Agra and popularly known as abandoned city. Mughal Emperor built Fatehpur Sikri and shifted his capital there. It is also a World heritage site and showcases an astonishing creature of historical significance. It is often visited by tourists who come to visit Taj Mahal in Agra. It was later abandoned by the Emperor due to the lake of water in Sikri and he had to shift his headquarters to Agra fort. Architecture of the building is outstandingly beautiful and worth seeing .

Entrance Fees and Timing of the Monuments
Please see below the entrance fees to major monuments of Agra.

Getting Taj Mahal
Once reach up to parking area of Taj Mahal, as getting off your vehicle, Possibility of hawkers and touts coming towards you and forcing you for buying their stuffs while on way to the ticket office. We would suggest you to take care of you personal belongings, passport and valuable items in parking area while proceeding towards ticket office.

Tickets are easily available at the counters as there are separate counters for foreigners and Indian nationals. To access the Taj Mahal, there are battery buses available outside the ticket's office premises to take you up to the entrance gate of the Taj Mahal. Government's battery buses are used to attempt to preserve the area's fragile architectural heritage. Shoe covers, Half Liter water bottle and Tourist Guide Map of Agra, Battery Bus & Golf Cart Service are provided free of cost with the foreigner's entry ticket for the Taj.

It is recommended to have a government approved guides for visiting monuments.

Recommended Tour
As mentioned, there are plenty to see in Agra and worth staying a night or two to cover all the tourist attractions of Agra. But we always recommend a Same Day Agra Tour either by road or train from New Delhi. Train is most preferred way of getting Agra because it is more comfortable and safe then going by road. Gatimaan express is the best train to use for trip to Agra that reaches Agra in 100 minutes that operates in the morning daily except Friday from Hazrat Nizamuddin railway station New Delhi at 08:10 hrs and returns from Agra at 17:50 hrs. Breakfast & Dinner are served on board.

SAME DAY AGRA TOUR FROM DELHI
Same day Agra tour by Gatimaan / Shatabdi train is an amazing day trip to the city of Taj Mahal. Traveling by Gatimaan / Shatabdi train to Agra from Delhi is best way to enjoy visits of UNESCO world heritage sites in Agra such as Taj Mahal, Agra Fort and Fatehpur Sikri. Train journey is really quick. We do not operate a tour on Friday as Taj Mahal is closed on Friday.
For Enquiry
Our Trip Advisor will get back to you with package details and special offers !!