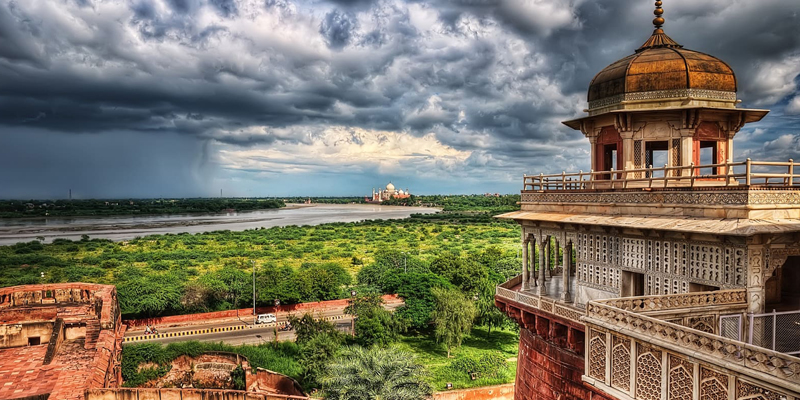 
Agra was the imperial capital of the Mughal court during the 16th and 17th centuries before it was shifted to Delhi.The Mughals were prolific builders and nowhere is this more evident than in the picturesque riverine egion along the Yamuna which is the backdrop for its palaces, tombs, forts and gardens.Three of these, the Taj Mahal, The Agra Fort and Akbar’s Abandoned capital of Fatehpur Sikri have been declared World Heritage sites by UNESCO.

Agra lies in the center of a rich and varied cultural territory. At one end of this region are the pastoral fields around Yamuna, and at the other , the stark and awesome ravines of the Chambal river.Between these two river are a number of towns, monuments and sanctuaries, making this one of the most popular travel circuits in North India. In mythology , Mathura was the sacred territory of Krishna while in history , it was the center of an important Buddhist kingdom and the imperial Mughal highway ran through it. Later Jat and Rajput Bundela kings built forts and Palaces in nearby Bharatpur, Deeg, Jhansi, Datia and Orcha. This region contains some of the best examples of Indian art and architecture.

Agra was the imperial Mughal capital during the 16th and 17th centuries.It was from here that the emperors Akbar , Jahangir and Shah Jahan governed their vas empire. The Agra city flourished under their patronage, attracting artisans from Persia and Central Asia, and also from other parts of India.Who built luxurious forts, mausoleums and gardens. Agra’s strategic location on the banks of the Yamuna as well as on the Grand Trunk Road linking eastern India with the west , made it a trading station, visited by merchants and travelers from all over the world. With the decline of the Mughals, Agra was captured by the Jats, the Marathas and finally the British.

By Road:
The best way to get Agra is by Car & Coach. The national highway (NH2) which runs from Delhi to Agra goes through Mathura.A network of smaller roads links the region beyond Mathura and Brindavan.

By Train :
Agra is also well connected by trains including the prominent high speed trains like Gatimaan Express train and Shatabdi Train which goes from Delhi to Bhopal via Gwalior and Jhansi and the Taj Express between Delhi to Agra. The famous Taj Mahal Tour by train is also conducted by Gatimaan Express Train from Delhi
For Enquiry
Our Trip Advisor will get back to you with package details and special offers !!