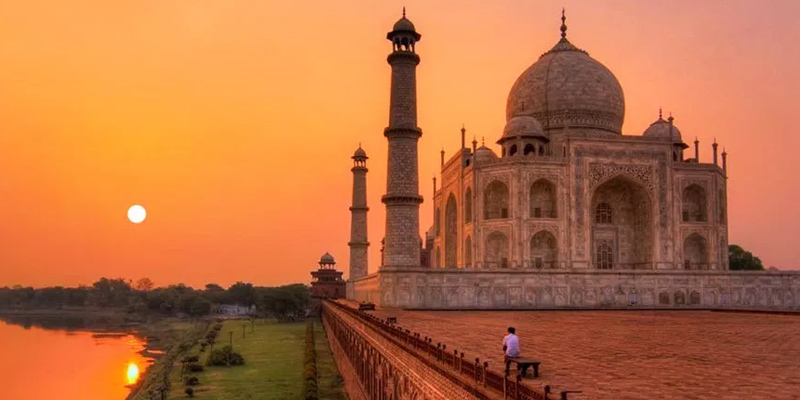 One of the world’s most famous Buildings

One of the world’s most famous buildings, the Taj Mahal commemorates both the Mughal emperor Shah Jahan and Mumtaj mahal, his favourite wife. Its perfect proportions and exquisite craftsmanship have been described as a prayer, a vision, a dream, a poem, a wonder. This sublime garden tomb, an image of the Islamic garden of paradise, cost nearly 41 million rupees and 500 kilos of gold. Around 20,000 workers laboured for almost 22 years to complete Taj mahal in 1653.

Elements of the Taj Mahal:

Marble Screen: The filigree screen delicately carved from a single block of marble was meant to veil the area around the royal tombs.

Four Minarets:
Each 40 m (131 ft) high and crowned by a chhatri, frame the tomb, highlighting the perfect symmetry of complex.

Tomb Chamber:
Mumtaj Mahal’s cenotaph, raised on a platform is placed next to Shah Jahan’s.The actual graves in a dark crypt below are closed to the public.

Calligraphiic Panels:
The size of the Koranic verses increases as the arch gets higher creating the subtle optical illusion of a uniformly flowing script.

The Lotus Pool:
Named after its lotus –shaped fountain spouts, the pool reflects the tomb.Almost every visitor is photographed sitting on the marble bench here.

Pishtaq:
Recessed arches provide depth while their inlaid panels reflect the changing light to give the tomb a mystical.

Pietra Dura:
The Mughals were great naturalists who believed that flowers were the “symbols of the divine realm”. In the Taj , pietra dura has been extensively used to translate naturalistic forms into decorative patterns that complement the majesty of its architecture.The Florentine technique of pietra dura is said to have been imported by Jahangir and developed in Agra as Pachikari. Minute silvers of precious and semi-precious stones, such as carnelian, lapis lazuli, turquoise and malachite were arranged in complex stylized floral designs into a marble base. Even today artisans in the old city maintain pattern books containing the intricate motifs used on the Taj and can still re-create 17th century designs in contemporary pieces.

Carved Relief Work:
Decorative panels of flowering plants, foliage and vases are realistically carved on the lower portions of the walls.While the pietra dura adds colour to the pristine white marble these hightlight the texture of the polished marble and sandstone surface.

Floral sprays:
Carved in relief on the marble and sandstone dado levels are framed with pietra dura and stone inlay borders.The profusion of floral motifs in Taj symbolizes the central paradise.

Jaali Patterns:
On the octagonal performed screen surrounding the cenotaphs are a complex combination of the floral and geometric. The filtered light captures the intricate designs and caste mosaic-like shadows on the tomb.

Calligraphy:
Inlaid calligraphy in black marble was used as a form of ornamentation on undecorated surfaces.The exquisitely detailed panels of inscriptions of Koranic passage that line the recessed arches like banners were designed by the Persian calligrapher Amanat Khan.
For Enquiry
Our Trip Advisor will get back to you with package details and special offers !!