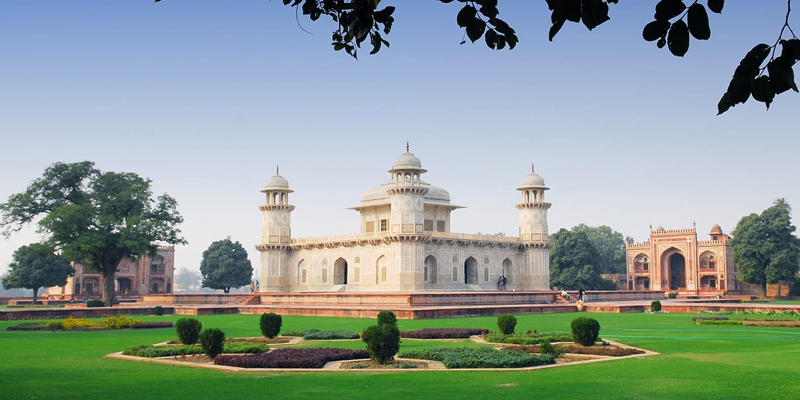 Lyrically described as a “jewel box in the marble” the small, elegant garden tomb of Itimad-ud-Daulah, the “Lord Treasure” of the Mughal empire was built over a period of six years from 1622 by his daughter Nur Jahan, Jahangir’s favourite wife. This tomb is a brilliant combination of white marble, coloured mosaic , stone inlay and lattice work. Stylistically too, this is the most innovative 17th century Mughal building and marks the transition from the robust, red sandstone architecture of Akbar to the sensuous refinement of Shah Jahan’s Taj Mahal.

Chini ka Rauza: North of Itmad-ud-Daula is Chini ka Rauzza (“China tomb” after its tiled exterior) built by Afzal Khan, a poet-scholar from Shiraz who was Shah Jahan’s finance minister. This large square structure is Persian in style, and at one time its surface was covered with glazed tiles from Lahore and Multan, interspersed with calligraphic panels in graceful Naskh characters.The burial chambar within has painted stucco plaster design that once must have complemented the tiled exterior.
For Enquiry
Our Trip Advisor will get back to you with package details and special offers !!